Bierzwnik : 720th anniversary of the arrival of the Cistercians 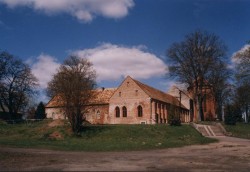 As this year we are celebrating the 720th anniversary of the arrival of Cistercian monks to Bierzwnik (Marienwalde), the Association got involved in several initiatives aiming at popularising the Cistercian heritage in the area. Our Association, in co-operation with local Authorities, Primary and Secondary Schools, as well as with the archaeological expedition from the Institute of Prehistory of Adam Mickiewicz University in Poznań, organised, in June and July, archaeological workshops for young people. They were further meetings meant to make pupils and students aware of the character of investigations taking place within the former Cistercian abbey for last several years.

This year the children were given an opportunity to get acquainted with various types of archaeological research carried out at the site. First, there were lectures provided by archaeologists, concerning air photography, underwater archaeology and magnetic surveying in archaeology. In July, during excavations, the young people had a chance to get acquainted with field works and various kinds of artefacts, as well as methods of recording, preserving and reconstructing those finds. The children also visited the Museum in Stargard Szczeciński, where they saw a modern display of archaeological artefacts. In July, as the last stage of the workshops, the involved children participated our annual festive “3 days on the Cistercian Route” and learned how archaeological finds could be used to promote local heritage and the area.